I went to have my nails done, and came out with a piercing..

I went to have my nails done, and came out with a piercing... 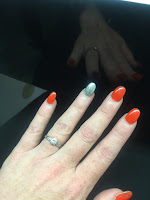 It wasn't going to be an unusual day. Nothing out of the ordinary. Work, then getting my nails tidied up again post hols ( a few acrylics were looking worse for wear!). Plus they were still "holiday orange" which isn't exactly in keeping with the more refined "home me".

So, off I popped for my appointment. My nail lady was running late, which was fine. She kept me supplied with magazines and coffee, so it was some much needed "me" time, which I welcomed.

I watched as people walked in for their appointments, and to discuss piercings - ears, nipples, belly buttons. I heard the chat, the aftercare, the healing, and I started to think how I had wanted to get a piercing when I was younger.

My nail lady called me over, and she asked me how my holiday had been ( she was my pre-holiday nail technician and also the woman who had to wax me - not a task I envy!! ). She asked if I still was thinking about a piercing. Mid wax aka torture, I must have mentioned it.

I said I was, but I would probably still be thinking about it when I turned 60! She said "well, we're quiet this afternoon at this time, why not get it done?". Aghast I was like - no chance. Then I thought should I? So I text the other half. After an initial "r u kidding?" response, he amazed me by saying "go for it!".

I gulped and said maybe. They bought me over a form to fill in, and that was it. I took the plunge!! So now, I am sitting here with very lovely nails (blue for your information) and a pierced belly button. A bar with a sparkly at the end!

For a while it was a bit swollen and a bit red, but actually, it didn't hurt that much. It felt a bit weird, but wow - I have actually done it!! It only took me about 20 years to be brave enough, but turning 40 has clearly unleashed my inner self.