My new Retro Single of the Week - The Killers - Mr Brightside

This week I have chosen the fantastic 'Mr Brightside' from the Killers as my retro single of the week.

'Mr Brightside' was the debut single from The Killers. It was the first single from their debut album 'Hot Fuss' which was released in 2004.

The album smashed to the top of the UK album charts, and this single peaked at number 10 in the UK singles chart.

This is such a brilliant song. I haven't heard it for some time now, but its one of those songs that still sounds distinct, recognisable and fresh. Its a song that also won lots of acclaim and recognition - its won awards for the best song of the decade, best track and been recognised by XFM, NME, various radio and TV to name but a few. Yes, its that good.

'Mr Brightside' is a rock song. It kicks straight in with that distinctive piano/keyboard tinkling that continues through it. The guitars kick in, then the drums and builds as Flowers vocals come in with the fabulous lyrics "coming out of my cage, and I've been doing just fine".

The video, well one of 2 videos this being the official one, is all ladies made up like madams a la Moulin Rouge style. They dance whilst the men look on, including Brandon who is watching whilst singing. Clearly this song is about being unfaithful, as this plays out with none other than Eric Roberts starring as the other man, whilst the lady flirts about between him and Flowers.

Apparently the song is based around an unfaithful ex of Flowers. The lyrics continue "It started out with a kiss, how did it end up like this". My particular favourite is the line "jealousy, turning saints into the sea, swimming through sick lullabies, choking on your alibis". Its just so clever, and he sings it with such force, such angst, it just sweeps you up.

This song truly put The Killers on the map. For a debut single, its just perfect, and I don't believe it could have been bettered. It still sounds absolutely amazing.

I suggest you go and take a listen to this, and play it loud as its just about as good as it gets this one. Let me know if you enjoyed it, and happy listening. :)

You can find more singles of the week, retro music and loads more over at My Music page - just click here. Happy listening :)
Posted by rahlou55 at 22:10 No comments:

A week to go - today's exercise despite being sooo tired !

Not the biggest workout, but worked the parts that count! The thing is - I did it, and I did not want to = better than sitting on the sofa :)
Posted by rahlou55 at 22:13 No comments:


and here is the rest:

More for my Wishlist :)

Here are my new items I am lusting for on my wishlist:

Email ThisBlogThis!Share to TwitterShare to FacebookShare to Pinterest
Labels: wishlist

New items for my Wishlist

Here are my new items for my wishlist:

And here's the rest :

Email ThisBlogThis!Share to TwitterShare to FacebookShare to Pinterest
Labels: wishlist

What I'm Listening to this Week

Email ThisBlogThis!Share to TwitterShare to FacebookShare to Pinterest
Labels: music

To spray tan or to not spray tan - that is the question....

Off on my holiday in a couple of weeks. I am naturally very fair indeed, and I do not tan, I burn a bit - not hugely, so all in all I come home pretty much the same shade I went, no matter the weather.

In the past, I have tried to tan - sunbeds were not for me, self tans - please - zebra stripes? Check. I have tried embracing my paleness to some success, but I have also tried spray tans. They seem to make me look healthy and more like I have a tan, but the problem is they fade.

So I've decided to look at the pros and cons for having one or not having one.

The advantages of having a spray tan:


The disadvantages:
Hmm. Still undecided. What to do?

Now its ants. Again. Slight bit of warm weather and here they are again - uninvited!

They put their first appearance in on Sunday and were blitzed with ant powder. I left it down yesterday, determined to be sure they had gone.

Literally, within seconds, the buggars were climbing out of the skirting again. Arghhh!!!!

Out of ant powder, I ploughed down to B&Q (other hardware stores are available) only to find that the shelves were virtually stripped bare of ant powder. Is there an ant epidemic sweeping Staffordshire lately? It would appear so.

Back to the house and they were rampaging everywhere. Ok, not exactly rampaging but they were crawling about up their corner in the hall. That's bad enough!!

More powder down and the hall once again looks like an explosion in a talc factory. Seriously, is this how I have to spend August?? It looks like crime scene investigations have been in dusting for fingerprints!! Not happy.

I also purchased an ant nest trap. Apparently it stops all ant activity in 3-6 days. I'm imagining swings and roundabouts, but I digress. The problem is that I don't want ants running around for 3-6 days, but neither do I want a hall full of powder.

What I want is for the ants to buggar off back where they came from, which I have a sneaking suspicion might be under the front step. That's fine - stay under the step, do not come into the house.

I need Gandalf - "You shall not pass!!"" I have nothing against ants per se, I just do not want them as house mates. This week has been a nightmare and its only Tuesday!! Nightmare. :(
Posted by rahlou55 at 23:20 No comments:

Email ThisBlogThis!Share to TwitterShare to FacebookShare to Pinterest
Labels: exercise

Email ThisBlogThis!Share to TwitterShare to FacebookShare to Pinterest
Labels: exercise

Planning ahead - Goals for 2017 - review my progress

Email ThisBlogThis!Share to TwitterShare to FacebookShare to Pinterest
Labels: 2017, goals

How do you top up a spray tan mid hols?

So, I'm on my holiday which is fabulous darlings. I always have a spray tan pre-hol, as sadly I am not blessed with olive skin, nor does my pale fair skin cope well with the sun or actually ever tan.

I face the choice of at least looking tanned to begin with via a spray version, but then fade slightly as the week goes on, or just go pale and interesting. Generally, people cannot help but advise on how you might best catch the sun which is considerate but really unwanted advice. I don't want to lie in the sun baking thanks all the same!!

I have tried this before with a light tanning cream, but it took soooo long to dry that I was walking around the apartment like John Wayne for over an hour because of the humidity. So what to do? Should I try the aerosol version? Should I try St Tropez or Loreal? So many options out there, that I just don't know what to try! Any tips would be very much appreciated!! Drop me a comment if you would be so kind!! :)
Posted by rahlou55 at 21:14 No comments:

I go on holiday in 3 weeks. Somehow, the diet and fitness plan just hasn't worked this time. My weight hasn't budged, and despite being healthy, I have not changed weight. I have exercised, and instead of the scales going down, they have gone up!

I do feel more streamlined, I do feel better, I do feel stronger and fitter. But those damned scales!! So now the holiday is imminent - time for a concerted effort.

I did consider the old faithful - the 3 day diet. However, on last attempts, it hasn't been a resounding success - quite the opposite. Rather than lose big amounts, I have either lost a pitiful pound or two, or worse still after 3 days of misery and practically starvation, I have actually, unbelievably, gained weight!! I have no idea what happened - possibly my metabolism fighting back thinking my body is starving - who knows. What I do know is that particular approach isn't an option this time.

So where does that leave me? Well, in short, where it leaves me is the wrong side of the stone mark, and with no choice but to go cardio crazy. If I can't lose weight through the nil by mouth approach, or by being healthy on the food choices, then it has to be exercise to break the status quo.

I shall endeavour to get my cardio in at least once, if not twice a day for 3 weeks. If nothing else, I will be stronger, more toned and in better shape than I am right now, even if the scales still refuse to budge.

Exercise has to be the key this time. And when I get back of course - this isn't just for holiday, its just that the holiday is imminent!!
Posted by rahlou55 at 23:35 No comments:

At the Airport! - getting excited now - just weeks away :)

Happy days. Through check in and security. Suitcases gone, perfume purchased. That is when the holiday begins.

Sausage sandwich with HP sauce and the first holiday pint!

Bit of an early start but Hey ho!!

When else is it acceptable to have a pint first thing in the morning? Happy Days. 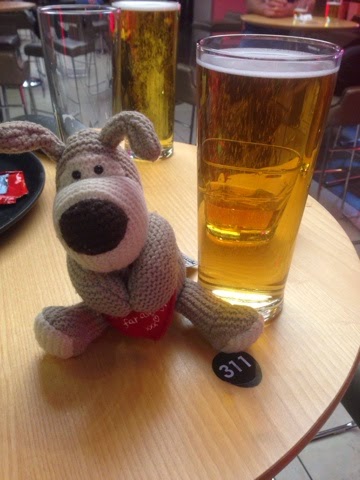 and here is the rest:

Email ThisBlogThis!Share to TwitterShare to FacebookShare to Pinterest
Labels: Spanish

Today's exercise - I am literally at the point of collapse

I have worked my backside off for the past couple of weeks, with the occasional rest day. Today, I have been watching the Wimbledon match - Konta and Williams, and feeling extraordinarily tired. I still have to go and do my workout yet, and all I want to do is curl up and stay on the sofa!

The problem is I cannot do that. I have to get this workout done. But I am so very tired. This is going to be a challenge of mind over matter. The body is weak but the mind is willing. Which will win?

I have to remember all my motivation and the reason I am doing this. If that fails, I need to look up when a plane next goes over and imagine myself on that plane - first as I am now, and second as I want to be.

My diet efforts this week - round up

I was doing great - exercising, dieting and losing weight. Then it stuck. For nearly 2 weeks! I carried on exercising, but those scales just would not budge. Demoralised, but with no choice but to keep trying, I decided to review what I was eating, not just how many calories or points, and when. The result was this combination of efforts and the result? So far, 2 lbs off, and the plateau seems to be over. Hopefully!

My exercise program is intense, so I need to make sure I am giving my body the right nutrients. Its started to work, now I just need to keep it up! 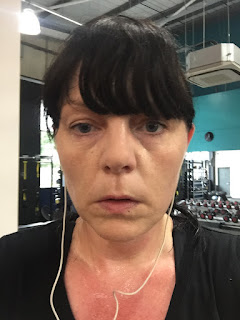 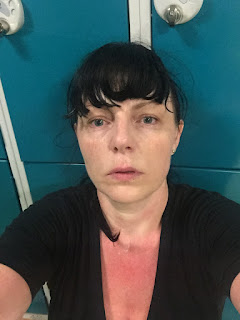 New Word of the Week - Jettison

definition derived from Merriam Webster
Posted by rahlou55 at 22:24 No comments:

17 Retro Single of the Week

75 Singles of the Week

Week 5 - My Week with Take That
Never Forget
Rule The World
The Flood
Greatest Day
Back for Good
Patience
Could it Be Magic
It's Take That!

Week 4 - My Week with Beyonce
XO
Beautiful Liar
If I Were a Boy
Love on Top
Bootylicious
Single Ladies (put a ring on it)
Crazy in Love
R&B / pop icon - Beyonce!